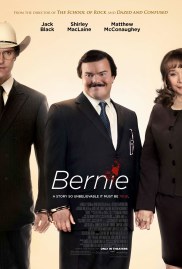 Jack Black’s presence generally makes any movie worth seeing, and this is no exception. Want more proof? “The School Of Rock”, “Be Kind Rewind”  and “Tenacious D”.  In “Bernie”, a strange movie directed by Richard Linklater , Black plays a beloved mortician. I say beloved because he is so good at what he does, and everyone seems to love him. Enter Shirley MacLaine (as elegant as always) who portrays a wealthy woman who is, by all accounts, the meanest person in town. By meanest I mean she’s a bitch, and no one wants to get close to her, until… she meets Bernie. But the less you know about the story the better. But get this: you will go in expecting  one thing and come out with something totally different. That’s not necessarily a bad thing. Not in Bernie’s case anyway. But perhaps the strangest thing about it is that it feels a lot like a comedy at first, and then it isn’t so much. It would be hard for me to emphasize without spoiling some major plot points, but that’s exactly how I felt while watching it. Jack Black, so good in many of his movies has never been better here. And he is surrounded by one heck of a talented cast, including Matthew McConaughey as a district attorney.  Director Richard Linklater, who previously worked with Black in the hilarious School of Rock provides his story with a rich script and three memorable performances. It wouldn’t be fair to let this movie go unnoticed. It’s one of the most unusual movies of the year and because of that, I highly recommend it.