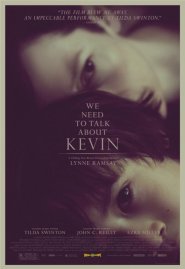 It isn’t easy being a sleeper nowadays. There’s been so much buildup for “We Need To Talk About Kevin”, which has traveled the film festival circuit since last year, that it’s difficult for ordinary moviegoers to feel as if they’re discovering it for themselves. I hope huge expectations don’t harm the film’s reception: it really is quite good and deserving of all the buzz it has generated so far. I hadn’t seen it before, but when I finally caught up with it, I wasn’t disappointed at all. Simply put, “We need to talk about Kevin” is about a mother (Tilda Swinton in a truly superior performance) who discovers that her son is some kind of a “demon child” who means to torment her ever since she gave birth to him. The father on the other hand (played by John C. Reilly) remains totally unaware of his son’s bad nature. I’m no parent, but I can tell you straight away that watching the child’s treatment of his good-hearted mother was pure torture. But that’s what makes “Kevin” such a good movie. We are invited to sympathize with the mother, while at the same time feel sorry for the father, who sees no wrong in his child.” He’s just a kid” he even says at one point to his wife. But she knows he’s wrong, and so do we. With an inventive and properly moody atmosphere, the movie dares to take its time. In a way, I wish I came to it knowing nothing about  the story, because it would have been fun to experience this film without knowing all of its dramatic beats and surprises. But I can still appreciate the skill with which it’s been made, because it truly is an intelligent, thought provoking film. It’s also a good showcase for Tilda Swinton, and an eye-opening introduction to Ezra Miller. If the mass moviegoing public prefers something more routine or formulaic, it’s their loss.