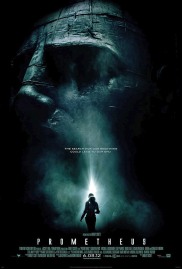 Prometheus is at once a fascinating and a frustrating movie. I found much of it captivating, and while I resist the hype-driven phrase “visual experience,” I did find myself drawn into its 3-D world, an extraordinarily rich cinematic environment created, in breathtaking detail, by artists and computers. I didn’t think I could care about another “Alien” movie, but I did. I didn’t think I would relate to the interaction between humans and advanced technology, but I did. Writer-director Ridley Scott has delivered on his promise to take filmmaking to another level by fully realizing his imaginative visual concepts of character and design. And Unlike flop-of-the-decade Michael Bay, who can transform anything into instant stupid, Scott knows how to harness technology to storytelling. Sci-Fi geeks will most definitely agree with me that Scott has revolutionized the genre following his ground breaking “Alien” and “Blade Runner”. Now 30 years after his last true Sci-Fi movie, it’s good to finally see him back in action. For those who may not know, “Prometheus” is sort of a  prequel to Scott’s 1979 classic “Alien”. The original was a pretty straightforward horror film. Here, the basics are different, but the story is still set in that same fascinating universe. It’s 2089 and we meet Elizabeth Shaw (Noomi Rapace), a scientist who is convinced of alien life having a major role in the story of mankind. In a perfectly crafted prologue, we discover the clues which will eventually lead her to travel to an unknown planet along with her partner Charlie (Logan Marshall Green), a small band of explorers, as well as Charlize Theron and robot David (Michael Fassbender, who steals every scene he appears in). “Big things have very small beginnings”, he even utters at some point. You know you’re in for a treat from that moment on.

Scott gets so many things right—the technology, the design, the completely absorbing environment, the staging of breathtaking action scenes—that it’s a shame the film falters because of weaknesses in his screenplay. It’s not a problem at first, but as the story reaches its final acts it becomes a real liability, and this is where the movie loses some of its momentum in my opinion. I was gripped by the first portion of the movie, then found my mind straying past the one-hour mark, only to be caught up once again before the big finale. Does this render the movie worthless? Absolutely not. Some of it is positively thrilling, and a lot of it is just plain fun. I don’t think it’s unfair to complain about its shortcomings after all the hype, but I wouldn’t want to lose sight of the extraordinary things it does achieve. And what it achieves is a remarkable moviegoing experience. “Prometheus” may not be a masterpiece, but it has enough visuals and twists to keep you glued to your chair for over two hours. In Hollywood these days, that’s no easy accomplishment.