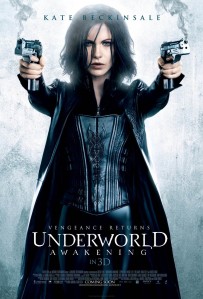 So is this yet another lame sequel, or is it another sign of the end of the world as we know it? If ever there were a typical beginning of the year movie, “Underworld Awakening” would be it, a film so dreary and downright stupid, that no studio would think of releasing it in the summer, when all eyes are focused on blockbuster movies. I saw the first three movies, and they all sucked. But Box office numbers were enough to persuade savvy producers that it was worth making yet another movie. Since part 3 was a prequel, the events of “Awakening” take place right after “Evolution”, where we find Selene (again played by Kate Beckinsale) waking up 12 years after humanity’s discovery and wiping of the vampire and Lycan species. Selene finds herself in a world where vamps and wolves are near extinction, and humans are always monitoring things, searching and destroying the last of her kind. To say that it goes out of control is a mild understatement. I know the “Underworld” movies are not meant to be taken literally, but everytime I watch a new installment, it leaves a bad taste in my mouth, which is not what I’d call a ringing endorsement. Worse, this sequel feels like a TV episode rather than a big budget feature film. Nothing much happens here, and when it ended, I was relieved. I don’t know what “Underworld” purists would make of this, but if you thought the first two sequels were hilariously bad, you won’t be rewarded in this fourth installment. And in case you’ve never been a fan of the series, or vampires and werewolves in general, save your money or watch something else instead. There’s no thrill in “Underworld Awakening” because you can see every surprise coming. When asked about it, screenwriter John Hlavin said that the movie will satisfy old fans and new audiences, and steps are being taken to honor what fans have loved but at the same time introduce fresh elements. Say it isn’t so.