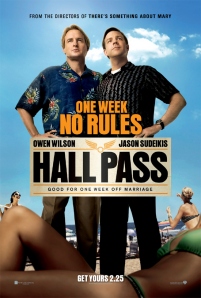 This movie has an intended audience: People who don’t mind a raunchy, racy, and dirty comedy. In other words: if you’ve enjoyed most of the Farrelly brother’s movies (“There’s Something About Mary, “Dumb And Dumber”, “The Heartbreak Kid”…), then you will probably watch and enjoy “Hall Pass” aswell. Personally, I can’t say I was thrilled by it, but I did have a good time watching it, so it wasn’t a total loss. The premise: Rick and Fred (Owen Wilson and Jason Sudeikis) are two married guys who cannot help but notice many attractive women that come within ten feet of them. Their spouses are well aware of their antics and on most occasions spot or overhear them talking about other women. After going just a bit too far, both men are granted a “hall pass” from their wives, which means an entire week to spend doing whatever or “whomever” they want. And this is where the fun begins. The Farrelly brothers are well known for their crudeness and gross out comedy. And make no mistake, this is a gross out comedy. There is a heart hidden somewhere deep, but some of the scenes are too offensive, that it makes it hard for anyone to take this movie too seriously. As for film content, there is nothing new here, but it generally works. Many scenes were outrageous and hilariously funny. To be honest, I didn’t expect to laugh as much as I did. But what I liked the most about “Hall Pass” is that it doesn’t shy away from presenting women as equally sex crazed as men (perhaps even more), with several female characters, all displaying high levels of estrogen. So in case you’re expecting a guys only flick, you’re in for a surprise.

All in all, “Hall Pass” is an enjoyable comedy that obviously doesn’t take itself too seriously, and if you don’t mind something silly every now and then, then this one’s for you. But for heaven’s sake, leave the kids at home.