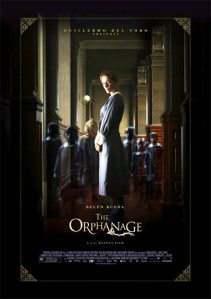 Chilling movie about a woman who moves into the orphanage she used to live in when she was a child and turns it into a home for disabled children. Before long, her son befriends an invisible child and strange events begin to occur. “The orphanage” is not your typical Hollywood horror movie; in fact it’s Spanish and it works better than any american trash. I was a bit tired of watching the same old horror flicks, but “The Orphanage” is proof that there’s still hope for the genre. It’s more than just a ghost story. The film ends with an amazing, moving twist that is at once heart-breaking and unexpected; director Juan Antonio Bayona will make damn sure that you won’t see this one coming. But it’s the film’s clever and philosophical side that stays with you long after your spine stops tingling. I highly recommend it!

Fun fact: This scored the biggest box office opening for a film in its native Spain, outgrossing the similarly successful “Pan’s Labyrinth”.