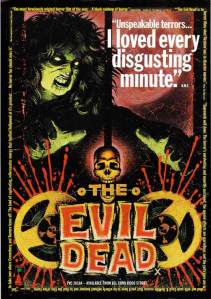 Five friends travel to a cabin in the mountains where they find evil spirits lurking around in the forest. One by one, they become possessed by the demon and develop the ability to chop each other to death! With only one of them still standing, it’s up to him to survive the night and defeat the evil dead. Made by college students, this ultra cheap but chilling horror movie has got to be the grossest thing I’ve ever seen. It was made on a budget of just $ 375,000, but still manages to provide a violent and gruesome  roller coaster ride for those with strong stomachs. Director Sam Raimi succeeds in creating a claustrophobic atmosphere for everyone watching; he wants us to think about a situation where we’re trapped with nothing but blood and death surrounding us, and I loved that about it. “The Evil Dead” never tries to be original or anything (in fact it borrows a lot from “Night Of The Living Dead” and “The Exorcist”), but still succeeds in being scary as hell (and that’s all I was asking for). One of the best of its genre.