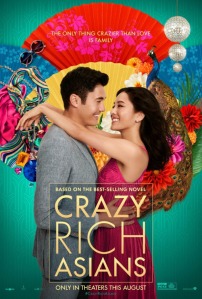 It would be tempting to call this comedy the “Asian” version of “Meet the Parents”, but considering the thought process that went into it, I won’t. For those who may not know, “Crazy Rich Asians” is Hollywood’s first major film in years starring an all-Asian cast. This is a big deal for Asians around the world (I watched it in a packed theater here in Montreal), and I expect it to be a major hit. Usually I don’t ask much from this type of comedy: I want it to keep me entertained, and this one does exactly that. It helps that the events take place in Singapore, which means it’s an opportunity to discover a new culture. It also helps that the cast seems to be having a great time, despite a familiar plot. Henry Golding plays a New Yorker who decides to take his girlfriend (Constance Wu) to visit his family in Singapore. The ultimate joke of this movie is that his family is “crazy rich”, which makes things a little bit awkward. Like I said, there isn’t much to say about the plot itself, but the performances are first rate, and the movie managed to keep me amused. It’s a modest but disarming comedy that will most definitely entertain a wide audience this summer.