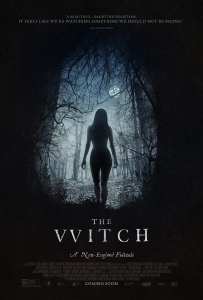 Despite its critical acclaim (89% on Rotten Tomatoes is a damn near perfect score for a horror movie), I didn’t fully appreciate writer-director Robert Eggers’ debut “The Witch”. It has so many good elements, including beautiful cinematography and a superior, haunting score by Mark Korven. The story is quite intriguing as well: it’s 1630 and an English farmer and his family are set to leave their colonial plantation following a conflict with the church. Their new home is a remote plot of land where…wait for it… mysterious things begin to happen. That’s all I can say without drifting into spoiler territory. I haven’t begun to hint at where this movie goes, because it is pretty well unimaginable. The question is how many scares you will derive along the way. If you’re a fan of slow-paced films where tension builds up slowly but surely, you’re a prime candidate. But if you like your horror movies to be genuinely scary, you will come away disappointed. Was I expecting something more terrifying? Perhaps. Is “The Witch” one of the greatest things to happen to the horror genre, as some enthusiasts have claimed? I don’t think so. It’s a well crafted, beautifully acted tale of terror, but it’s only partially successful in my opinion.