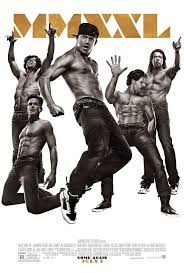 As one who didn’t like the first “Magic Mike” movie, I didn’t mind this one so much. For one thing, I knew what I was in for: more half naked dudes going wild in front of the ladies. And yet deep down inside, “Magic Mike XXL” is just a buddy movie. Channing Tatum reprises his role as Mike. For the past few years, he has quit the dancing business to focus on his furniture-design business. But now he’s taking a break to re-team with the Kings of Tampa (Matt Bomer, Joe Manganiello, Kevin Nash, Adam Rodriguez) for one last ride at the stripper convention in South Carolina. That’s it. The movie isn’t deep and it sure as hell doesn’t reinvent the wheel. The production is still needlessly overlong and overblown. But it’s certainly lively and has some funny moments that involve Mike and his old buddies. As for the dance choreography, some of it is impressive, and some of it becomes repetitive after a while. But if, like me, you know what you’re getting into (or, unlike me, enjoyed the first film) I doubt you’ll be bored or dissatisfied.  Just don’t take it too seriously.