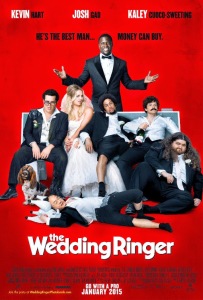 If you follow this blog regularly, you probably know that I’m not a big Kevin Hart fan. Which is why I approached “The Wedding Ringer” with very low expectations. But unlike some of his other recent comedy vehicles (“Ride Along“, “Think Like A Man Too“), this one actually offers laughs, plus a compatible costar in Josh Gad. And for a silly film, the initial premise is actually clever: Gad plays a “loser” who is about to marry the sexy Gretchen (Kaley Cuoco-Sweeting from “The Big Bang Theory”). When he can’t find a best man, the wedding planner (Ignacio Serricchio) points him in the direction of Jimmy Callahan (Hart), who, for a fee, will provide him with seven best men before the big day. At this point, the movie becomes a full-out, R-Rated farce: frantic, sometimes overly frantic, but often quite funny. With high energy and a good cast, it accomplishes everything it sets out to do in an hour and a half. It may not be cinema for the ages, but it’s fun and I actually had a good time watching it.