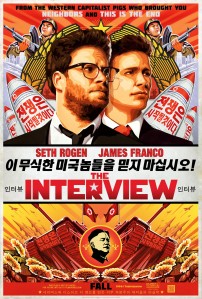 orth Korea never wanted you to see is finally here. So was it worth the wait? The answer is quite simply no. As someone who enjoys Seth Rogen’s comedy but was disappointed with “Bad Neighbors”, I hoped this movie would hit the sweet spot again, especially since he is working with  his longtime writing partner Evan Goldberg. I certainly couldn’t have foreseen a film as silly and forgettable as “The Interview”. And yet you have to give these guys credit, not only for audaciousness, but for their complete commitment to this project. With that aside, I think the problem with the movie is that it’s a one joke idea. Seth Rogen and James Franco give it their best as producer and tabloid journalist who are trying to land a worldwide scoop: an interview with North Korea’s notorious Kim Jong-Un. This leads to a plot to assassinate the leader and you can probably guess the rest. Rogen and Goldberg wanted to have fun with the idea of interviewing one of the most feared leaders in the world. But even a good idea needs some funny moments in order to work, and this is where the movie falls short. While I did laugh a few times, I think the end result can only be called a disappointment because you’d expect a lot from these guys. That makes it hard for me to recommend investing an hour and 50 minutes in “The Interview”.