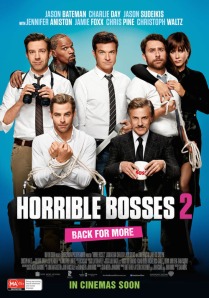 Sequels are the curse of modern-day comedies. Occasionally you find a good one, but more often the second installment ruins all the fun and sense of discovery that made the original a hit in the first place. “Horrible Bosses” was one of my favorite comedies of 2011. I tried to remind myself of that as I watched “Horrible Bosses 2”, a pointless and mostly silly sequel. How could a raunch-fest that slapped a stupid smile on my face degenerate into this? I won’t waste much time describing the storyline. Suffice it to say that Jason Bateman, Jason Sudeikis and Charlie Day get in trouble again when they decide to kidnap a millionaire’s son (Chris Pine) and ask for a ransom. That’s a good idea for a 20 minute TV episode. Unfortunately, the movie runs 108 minutes and as we move along, you can feel the life slowly draining from it. I have to admit though: it isn’t a total bummer. Director Sean Anders guides the trio to a few mighty laughs, but overall it is a disappointment, which for me is harder to take than failure. Is it because I’m a huge fan of the original? Perhaps. Either way, I think these talented actors deserve a better vehicle than this.