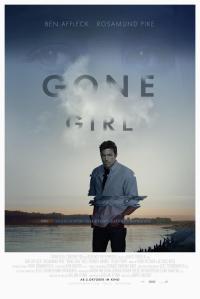 Not only did David Fincher have to sweat out making his directing return following “The Girl with the Dragon Tattoo” by adapting Gillian Flynn’s 2012 best seller, he also cast Ben Affleck in the leading role. Ballsy. So here’s the deal: His film sneaks up, messes with your head and then floors you. You can’t shake it. It’s that haunting, that hypnotic. And yet on the surface, the plot sounds like an ordinary detective story: A wife disappears. The cops investigate. A search party ensues. Done. There’s nothing else you should know if you’ve never read the book. But there is nothing ordinary about the way Flynn wrote her best seller, which used the disappearance to dig deep into the troubled relationship between a man and his wife. There’s nothing ordinary either about the way Flynn transforms her own novel into a model of multilayered film adaptation. And there’s nothing ordinary about the way David Fincher merges all the elements into a movie that will hit you like a ton of bricks. Did Nick (Affleck) kill his wife Amy (Rosamund Pike)? That’s the question that eats at you as “Gone Girl” holds you in its grip for an agonizing 149 minutes. Fincher is not giving a sermon here. Neither is Flynn, whose ever-tightening script keeps the suspense on high sizzle. Pulses will pound and nerves will be fried as the story keeps throwing one twist after the other.

The sheer brilliance of Pike’s performance anchors the film. Her character may have disappeared, but through carefully crafted flashbacks, we learn more about her relationship with Nick. I think it’s safe to say that this may be Pike’s most potent two hours and a half onscreen. Do you want to see screen acting at its riskiest and most riveting? Watch her. Affleck is also solid here, but it would be difficult to talk more about these characters without spoiling the film’s many mysteries. So I’m gonna shut up. All that’s left to say is that Fincher takes his unflashy time building character and revealing troubled psyches in the most unlikely of places. His work with the exemplary actors results in a film of startling impact, packed with twists you don’t see coming. “Gone Girl” is full of dark secrets, and how they unravel will keep you glued. It’s terrific.