If you grew up 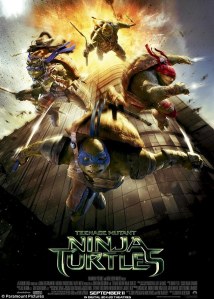 in the 90’s, you probably know that the Ninja Turtles were kind of a big deal back then. TV, video games, figurines…those guys were everywhere. The turtles live in the subways beneath Manhattan, where, exposed to radiation, they have grown into teenager-sized, intelligent creatures, and have been trained by their master “Splinter” to fight crime. If you grew up in the 90’s, you probably remember the live-action movies as well. While far from perfect, they were still entertaining to watch (at least for an 8 year old). Now comes “Teenage Mutant Ninja Turtles” version 2014, produced by non other than Michael Bay, who has a reputation of destroying everything in his path (see “Transformers”). So I have to admit: I did not walk into the screening with high hopes. For that matter, I did not walk out afterward with my spirits renewed. But this movie is nowhere near as bad as it might have been, and probably is the best attempt to revive a series many thought was dead and buried. It offers, in other words, more or less what Turtle fans will expect: Action, subways, pizzas, Shredder, Megan Fox, an entertaining plot and an explanation of how the Turtles came to be. What more can you ask for? The plot involves TV news reporter April O’Neil (Fox) and her new friends, the teenage turtles. Together they must fight against a secret society named the Foot led by baddie William Fichtner and his Japanese warrior known as Shredder. Will the plot thicken? Not really. But “Ninja Turtles” achieves exactly what it sets out to do, with the help of eye-popping visual effects and a funny dialogue. It doesn’t leave us with food for thought but this was never its aim. This is just enjoyable summer-movie fare and there’s nothing wrong with that. Cowabunga, dudes!

P.S: Here’s a game I would love to play again!