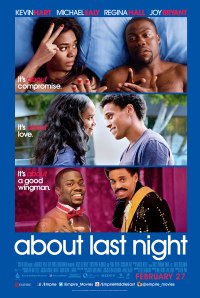 Audiences gearing up for something sweet like “Endless Love” or “Winter’s Tale” need to adjust. Of all the romantic movies playing at the multiplex, “About Last Night” is probably the only one worth watching. Am I saying it’s a great movie? Not I’m not. But the film lucks out in director Steve Pink (“Hot Tub Time Machine”) and his funny cast. I’ve never been a fan of Kevin Hart, but he certainly steals the show here, playing a guy who can’t commit to a relationship.Then he meets Joan (Regina Hall) and stuff happen (mostly in the bedroom). Meanwhile, Hart’s pal Danny (Michael Ealy) and Joan’s roommate Debbie (Joy Bryant) start dating and this is where the movie goes soft. Not complaining. The result is a funny and touching comedy with a real sting in its tail. The film makes sharp observations about relationships, responsibilities, the pressure of dating, and more. The candid sexual conversations define this as a film for adults. But who says grownups don’t want romantic fulfillment in movies? That’s where director Steve Pink becomes surprisingly traditional. Dudes always fear movies like “About Like Night”. I say man up and see it. You just might learn a thing or two.