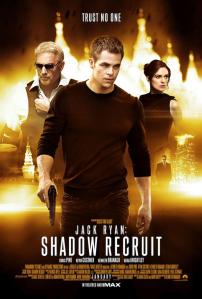 While everyone is busy with Oscar nominations, “Jack Ryan” sneaks into theaters in time to remind us that January releases don’t have to be strictly terrible (I’m talking to you, Hercules). Yes, it’s a routine spy thriller. Yes, three actors have already played the same role in the past (Alec Baldwin in “Hunt for Red October”, “Harrison Ford in “Clear and Present Danger” and “Patriot Games” and Ben Affleck in “The Sum of all Fears”). Yes, it doesn’t entirely make sense. Never mind all that. “Jack Ryan” is exciting and ridiculously cheesy at times. But it’s also a great vehicle for Chris Pine who plays a CIA analyst chasing a Russian baddie (Kenneth Branagh, fun to watch) who plans to crash the U.S economy via the internet and a terrorist attack.The leading actors play their parts with conviction, and director Kenneth Branagh orchestrates the action and visual effects with considerable skill. Does it always pay off? Not really. But Branagh knows exactly how to keep the action going. There is one nail-biting car chase, inventively staged and cut. And there are some edge of your seats moments. It’s a loose cannon of a movie, entertaining overall if wildly inconsistent. And that’s a particular compliment at this point in the movie season.