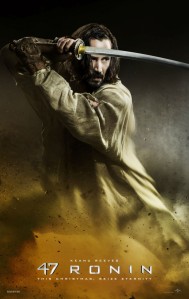 Keanu Reeves keeps telling us that his career is not dead and buried just yet. He directed and starred in his own martial art movie “Man Of Tai Chi” earlier this year (which sucked by the way) and now he’s in a sloppy big budget fantasy adventure film called “47 Ronin”. He plays an outcast who joins the leader of 47 samurai fighters in order to avenge the death of their master, who was killed by an evil overlord. If you’re thinking this movie won’t be going where you think it’s going, snap out of it. On paper, it sounds crazy fun: a colorful Samurai flick with swords, witches and plenty of ass kicking. What’s on screen, however, feels dull, uneven and curiously lifeless. As to the screenplay, its awkwardness is heightened by some cheesy dialogue by unknown director Carl Rinsch. “Rivers of blood and mountains of corpses will not stand in our way”. Oh geez. It’s never a good sign when you sit there thinking “will it ever end”? Despite a beautiful cinematography and some solid action scenes, “47 Ronin” is just not enough.