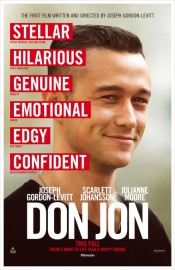 Part of me doesn’t even want to tell you that “Don Jon” is a movie about a porn addict. Chances are you’ll stop reading. That would be a mistake, because “Don Jon” is not infected with the usual comedy formula. It’s far from perfect, but it’s funny, honest and acted with such no bull audacity that I already hate myself for just thinking I’d hate it. And yet at the screening I attended, reaction was all over the map. Several people hated it (I’m talking to you, Elie Fares, Gino Raidy and Tony Jreij), while others said it was highly entertaining. So yes, “Don Jon”, Joseph Gordon-Levitt’s directorial debut, won’t be everyone’s cup of tea. Levitt also plays the title role, a macho guy who enjoys sex a lot, although it doesn’t give him nearly as much satisfaction as watching porn on his laptop. That’s Ok by me. In fact, the movie is better than Ok, considering the traps that could have ruined it. Cheers to Gordon-Levitt for giving one of the most honest performances of the year. Cheers too, to Scarlett Johansson, Julianne Moore and the rest of the colorful cast. Refusing to hide from the truth or bow to it, “Don Jon” makes its own rules. And it got to me. I suspect that audiences will echo my friends’ widely varied response to the film, but this much is sure: “Don Jon” may earn a niche as the year’s most original and unusual comedy.