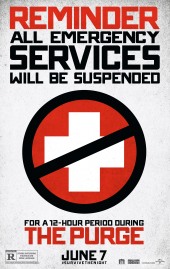 Everybody wants to make an original horror movie these days.  If anyone could reinvigorate the concept, it’s James DeMonaco (“The Negotiator”) and that’s what this writer/director tries to do in “The Purge”. And he almost pulls it off with his nifty premise: in 2022, and once a year, all crime is legalized for a period of 12 hours. This means a lot for Ethan Hawke, who sells home security systems. During that 12 hour period, he locks up his wife and two kids and wait for the purge to end. But you know things won’t go according to plan when his son lets in a stranger before the gates lock shut.That’s all I can say without drifting into spoiler territory; I haven’t revealed more than you can see in the trailer. And I haven’t begun to hint at where this movie goes, even if it is pretty predictable. This is a solid premise, better than most horror films these days, yet I don’t think “The Purge” achieves its stated goal. After a promising start, the movie devolves into a series of deja-vu moments before it reaches an all too familiar conclusion. It’s a clever attempt to make something new, but it is only partially successful. That’s too damn bad.