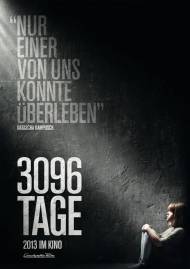 “3096 Days” is the true story of Natascha Kampusch, the 10 year old Austrian girl who was snatched off the street by a stranger in 1998. Her kidnapper, Wolfgang Priklopil shut her in an underground room beneath his garage, telling her that the doors and windows were booby trapped and that her family had forgotten about her. The violence and cruelty inflicted on her is all too accurate according to Kampusch herself who called the work “very authentic”. But can a story about a little girl’s struggle to survive on her own for 3096 days really be turned into a viable movie? The answer is yes and no. I don’t doubt the filmmaker’s good intention, and if you’re curious about Kampush’s story I suggest you watch this film. But because the story goes on for almost two hours, the film doesn’t flow as seamlessly as it might and becomes quite repetitive at some point. That’s the harshest criticism I can level at this intriguing film, but it is a problem, and it did leave me a bit disappointed. Either way, judge for yourself.