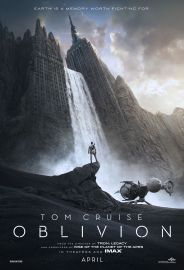 Here’s a hit and miss sci-fi film that leaves you wishing it was better than it is. Why? Because director Joseph Kosinsky (“Tron: Legacy”) wussies out on a sharp premise. Because he wastes a killer cast that’s ready to rock the shit out of it. Never happens. This is not to say that “Oblivion” doesn’t have impressive visuals. But even cutting-edge technology needs a story to create a satisfying movie experience, and that’s where the movie fell short. The story borrows a lot from such films as “Total Recall” and the highly underrated “Moon” to a point where you start experiencing déjà vu. The action takes place in the late 21st Century, years after Earth repelled an alien invasion that turned the planet into a radioactive wasteland.Tom Cruise is a security repairmen stationed on an evacuated Earth where he lives in a floating home with his partner (Andrea Riseborough). But while he has armed drone machines to assist, they turn against him the minute he attempts to rescue the crew of a crashed space ship. What drags the movie down from that moment on is the story’s refusal to settle for “simple”. Instead, it aims high, perhaps a bit too high, before it falls flat on its face. But still, Hard-core sci-fi fans may derive so much enjoyment from the look of the picture, and its action scenes, to overlook its shortcomings. And a goodly portion of the audience may be content to watch Olga Kurylenko in a futuristic look. But at a shade over two hours, “Oblivion” needs more than eye candy to keep us engaged, especially on the emotional level it aspires to reach. The uninspired screenplay simply doesn’t deliver the goods.