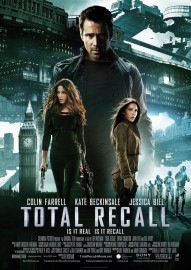 Cool cast. Potent premise. Piss-poor execution. And so dies “Total Recall”, a wannabe sci-fi movie set in the future, also a remake of a 1990 film of the same name starring Arnold Schwarzenegger and Sharon Stone (not yet a major star). Of the movie, at least it can be said that no one was tampering with a classic. The 1990 original was fun, but the film itself left a lot to be desired, in spite of a solid cast. The new version, directed by Len Wiseman (not so wise, if you know what I mean), starts off really well, but pretty much winds up being just another lousy remake. One of the film’s chief virtues however is Colin Farell, who does a good job in an otherwise cheesy script. He plays Doug Quaid, a man who has had his memory wiped clean and replaced with a brand new identity. One day, Doug is tempted to try Rekall, a memory-implant that lets him live a fantasy life in his head. He chooses to be a secret agent. Minutes later he finds out that he, wait for it, really is one. No worries, this isn’t a spoiler, since the movie ruins it for us from the word go, killing all suspense. But I was totally unprepared for the rest of the movie, which turns into one gigantic action sequence; a propulsive, nonstop videogame-like experience without letup. It may sound impressive at first, but merciless at the same time. And when it was over, I was exhausted, not satisfied. This is not to say that the movie doesn’t have its entertaining moments, because it does. But for the most parts it’s dull, and never reaches a meaningful conclusion. There’s a lot of huffing and puffing to convince audiences that there’s something more to it. Don’t buy it. What was supposed to be a fun time at the movies will eventually turn into something completely forgettable instead. Damn shame.