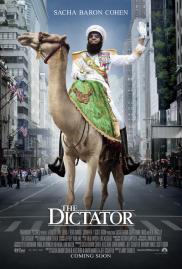 As someone who, swimming against the current, doesn’t care much for Sacha Baron Cohen and his alter egos, Borat, Ali G and Bruno, I still wanted to give the guy another chance to impress me. I certainly couldn’t have predicted a movie as lame and mediocre as “The Dictator”. Why? Because it wussies out on a sharp premise. Judging from the stunt Cohen pulled on Oscar night back in February, you’d expect more from his movie. Instead, it’s a dreary collection of  clichés and caricatures with a few laughs in between. Cohen plays  Admiral General Aladeen, dictator of the fictional North African country of Wadiya. On a trip to New York, he is duped by his chief advisor (Ben Kinglsey) to sign a peace treaty at the United Nations. Instead, he is replaced by his double and left to survive all alone in the big city. And so dies “The Dictator”, as it gets sillier and sillier as we move along. Blame Baron Cohen, who’s wasted himself once again in a movie that eliminates laughs in favor of relentless stupidity. 2009’s “Bruno” was lousy, but it was also a big hit. So “The Dictator”  is more of the stupid same. What the man doesn’t get is that at this point, the formula is beginning to feel old. If you’ve seen any of his previous films, you’ll know exactly what to expect from his latest effort. Problem is: it’s not so funny anymore. The idea is concrete, but the execution couldn’t be more sloppy. Still, there’s one hilarious scene featuring John C. Reilly as a hotel manager who mistakes our man for an Arab. “You’re all Arabs to me,” he says, “the blacks, the Jews, those blue, tree-hugging queers in Avatar.”  Too bad we don’t get more scenes like this one. Instead, “The Dictator” comes off as a blueprint for a funny script no one really made. Now that’s what I call suicide.