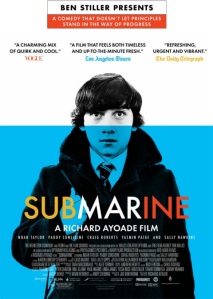 I’ve seen so many coming of age films and enjoyed most of them. “Submarine”, written and directed by Richard Ayoade from Joe Dunthorne’s novel, is three-quarters of a very good indie movie. It’s a sharply written black comedy with an incredible eye for detail. The setting is Wales in the 1980’s, where we follow the story of Oliver Tate (a terrific Craig Roberts), a schoolboy whose life is a movie  in his head. His parents, played by Noah Taylor and Sally Hawkins (“Happy Go-Lucky”) are an extremely uptight couple whose marriage is on the rocks, but are both worried about their oddball son. The heart and bitterness of the movie is the awkward relationship between Oliver and the weird girl from school, Jordana Bevan. As far as charm is concerned,  “Submarine” has lots and lots to offer. Mainly this is the result of excellent casting. Roberts, who’s simply outstanding, looks like a cross between Woody Allen and Arctic Monkeys’s Alex Turner (who incidentally contributed a handful of memorable songs to the soundtrack). But after charm what? I’m not really sure. After a solid first half, the movie slowly loses its momentum when it tries to focus on Oliver’s parents. I certainly liked the movie better when it was all about  Oliver’s adolescent affair with his classmate. Still, Ayoade keeps things interesting with a dialogue that is both witty and believable, and the overall result is an example of a genre that cinema has often excelled in: the loss of childhood innocence. And don’t forget to keep an eye on Craig Roberts, who’s simply a treat to watch.