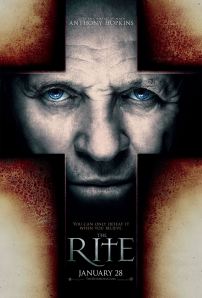 Since “The Exorcist”, only a few movies dealing with the same subject turned out to be decent enough. “The Rite” isn’t one of them. In fact, it would be unnecessary to talk about its premise, which sounds chilling at first. Think of it as “The Exorcist” meets “The Order”, minus the fun. “The Rite” offers absolutely nothing new to the table. Even as a cliché exorcism flick, it fails miserably. Why do I sound so pissed off you might wonder? Well to be fair, the film starts of pretty well. The first 30 minutes were really promising. But from then on, it derails, and it derails badly. For a second there, I thought the movie had potential. Boy was I wrong. The story (supposedly based on true events) gets everything wrong. From the underdeveloped, dry performances to the unsatisfying direction, it’s a terrible mess. And to think this is the same director who brought us the far more superior thriller “1408”. How far you have fallen man. To make things even worse, not even Legendary actor Anthony Hopkins could save this from being a complete waste of time. Granted he’s the best here, which isn’t saying much really.

Between a solid start and a terrible climax, “The Rite” offers nothing more than a series of exorcism rituals that grow tiresome with repetition. “The Exorcist” is still the only keeper. And you’d be doing yourself a huge favor if you just exorcise this from your list of movies to see this year.