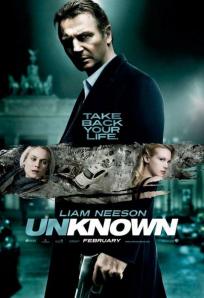 The people involved in “Unknown” are clever ones. They made the right choice when they decided to Cast Liam Neeson in the lead role. Few actors are better than him at playing an everyday man who has had the rug pulled out from under him. He did it in “Taken” a couple of years ago, then again in last year’s “The Other Man”, and now in “Unknown”. He is truly dynamite in this edge of your seat thriller about a a couple, Dr. Martin and his wife, who fly to Berlin in order to attend a biotechnology conference with a colleage. When he notices that one of his bags is missing, Dr. Martin decides to go back to the airport and retrieve it. On his way back, his car enters a horrific accident and leaves him in a coma for 4 days. When he wakes up, he discovers that someone has taken on his identity and that no one (including his wife) seems to believe him. As a veteran thriller watcher, one might think several possibilities here: The man’s insane. He has been brainwashed. It was all a dream. The first 10 minutes never happened in reality. His wife is plotting to get rid of him. You get the idea. The film will keep you guessing, and as predictable as it may sound at first, I’m pretty sure you won’t be able to figure this one out easily. It keeps coming up with twists and turns, even when you know there’s nowhere else it can go. I confess: I was hooked from the first minute, and I enjoyed every second of that breathless ride. But at some point during the movie, I was reminded of Roman Polanski’s “Frantic”, in which Harrison Ford played a doctor visting Paris with his wife for a convention. Ford stepped in the shower in their hotel room, and when he stepped out, his wife was gone. I noticed a lot of similarites between the two movies, and If I were you, I’d give both a try.

Maybe I’m a sucker for mystery flicks, or maybe I was in a good mood when I watched “Unknown”, but either way, I had a good time watching it, and I hope you find it as smart and entertaining as I did.