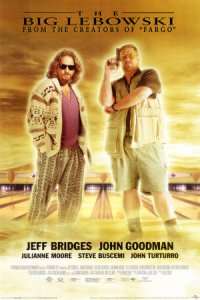 One big funny joke, courtesy of the Coen brothers, about an unemployed slacker better known as “The Dude” (Jeff Bridges in a one of a kind hilarious role) who’s mistaken for a big shot millionaire of the same name, and then gets hired by the guy to deliver a ransom when his wife is kidnapped. The plan goes beserk when The Dude’s friend (John Goodman) schemes to keep the full ransom instead of delivering it. If you’re a fan of the Coen brothers, then you’re probably familiar with “The Big Lebowski”. Afterall, Jeff Bridges’s character has become an icon in today’s pop culture (I’m “The Dude” man!). But is it their best work? I don’t think so. It’s very funny, with plenty of amusing and memorable characters (John Turturo is hilarious as Jesus the bowler), but I wouldn’t rank it on the same level as “Fargo”. But still, there’s a lot to enjoy here, and it’s definitely hard to dismiss any movie directed by the Coens and starring the legendary Jeff Bridges (is he the man or what?).