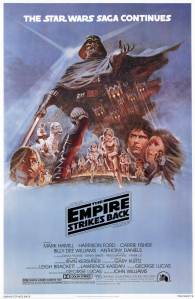 Also known as the best sequel of all time, this chapter has more excitement and more dazzling special effects than any other “Star Wars” movie. The rebels are still pursued by Darth Vader, but the story focuses more on Luke Skywalker, who receives a posthumous command from Obi Wan Kenobi, ordering him to travel to the Dagoba system to find the mystical Yoda (voiced by an amazing Frank Ozz) who will eventually train him to become a real jedi warrior. The movie ends with a startling revelation from Darth Vader (and quite shocking if you’re a first time viewer), in one of the most iconic scenes in cinema history. Everyone is in fine form, but it’s Harrison Ford who steals the show yet again as Han Solo. Die hard fans might argue which “Star Wars” movie is the best, I’ll go with this one; it’s one the most entertaining films I’ve ever seen. It can’t get any better than this! Special edition runs 3 minutes longer.