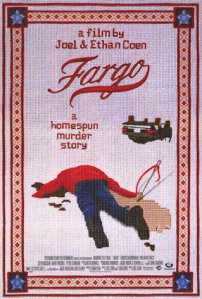 “You’re a smooth smoothie, you know?”

Excellent Coen brothers movie about a car salesman who hire two thugs to kidnap his wife, in order to collect the ransom money from her wealthy father. And that’s just the beginning! To reveal more about the story would be unthinkable. But again, and like most of the Coen’s movies, it’s not for every taste. There’s a mix of humour and suspense (Hitchcock style), and if you’re into that, then you’ll definitely enjoy this one aswell. It’s one of the Coen’s finest movies (if not the best).

Fun fact: William H. Macy stated in an interview that, despite evidence to the contrary, he did hardly any ad-libbing at all. Most of his character’s stuttering mannerisms were written in the script exactly the way he does them in the film