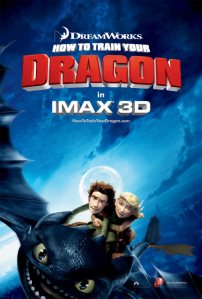 The folks at Dreamworks have done it again. “How To Train Your Dragon” is entertaining, with a fresh idea and colorful characters. It’s the story of a young Viking, who, in order to become a man, must be able to hunt a dragon down and kill it. Instead, he befriends a reluctant beast and ends up training him. His father (voiced by an amazing Gerard Butler) is also the leader of the community.I never ask too much from an animated movie, but I can honestly say that “How To Train Your Dragon” is very funny , and I had a great time watching it.The ending does not leave the door open for a sequel, but I sure hope they find a way to do it anyway.