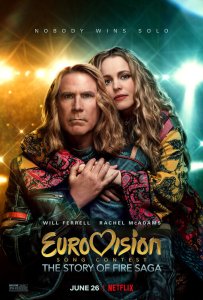 What can you say about a movie that runs out of steam only 30 minutes in but still has another 90 minutes of material left? I don’t usually mind this type of comedy, and you can think of “Eurovision Song Contest” as a cross between “Taladega Nights”, “Walk Hard”, and pretty much any movie starring Will Ferrell. But this is a one-joke premise at best, and as it ambles along, you can feel the life slowly draining from it. Ferrell and Rachel McAdams play aspiring musicians from Iceland who have one dream in mind: go to the Eurovision Song Contest. Problem is, they suck, but that won’t stop them from trying to fulfill that dream. It’s a ridiculous premise, mostly because you know right from the start that they don’t stand a chance. But this is a Hollywood movie after all, and you know how things will play out eventually. Fans of Ferrell will enjoy his over-the-top performance, and he is obviously having a good time here. But I just wish the film itself had more funny jokes up its sleeve. I’m sure the idea of having two goofballs participate in the Eurovision Contest sounded like a good bet at first. Too bad it didn’t turn out better.