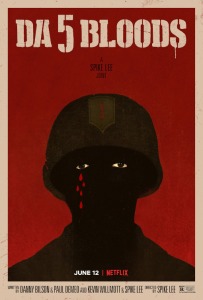 Up until a chaotic final act, Spike Lee’s “Da 5 Bloods” is a potent and powerful film that is also very entertaining. In telling the story of Four African American veterans who return to Vietnam decades after the war to find the remains of their friends and a stash of buried gold, Lee injects his script with themes that we’ve come to expect from the man himself. And what do you know, his film couldn’t be more relevant in 2020, especially with the rise of the “Black Lives Matter” movement across the world. It might be unusual to describe this truly powerful film as entertaining, but that’s what makes Spike Lee so special. His movies couldn’t be more thought provoking, but they’re carefully wrapped in a mainstream package, which makes them accessible to almost everyone. And “Da 5 Bloods” is no exception: it’s a good story told with passion, humor, and a keen eye for detail. Best of all, it’s now streaming on Netflix. You can’t ask for a better summer movie to sink your teeth into.