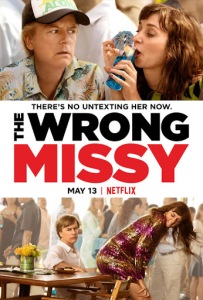 Wow. Where do I begin? I may have just witnessed the worst movie of the decade so far (“Like A Boss”, you’re off the hook). This lazy, painfully unfunny comedy starring David Spade and Lauren Lapkus will have you cringing for 90 minutes (if you can make it to the finish line). Spade plays a “loser” who meets the woman of his dreams. Or at least he thought he did. When he invites her to his company’s weekend getaway, the wrong woman shows up (seriously, he was texting someone else all along by mistake), which leads to a series of catastrophic events (pun intended). Funny? For about 5 seconds. Part of the problem is Lapkus herself. Her character is annoying and downright obnoxious. And she gets no help from Spade, who seems to be embarrassed of being in this mess (who can blame him?).There’s not a genuine laugh here, unless you consider loud screaming and toilet jokes to be comedy. Not since the preposterous “Jack & Jill” have I witnessed something this God-awful. “The Wrong Missy” is streaming on Netflix. Now you know what not to stream.