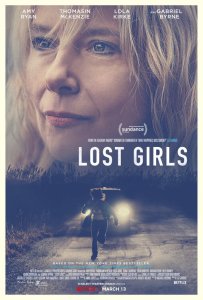 Amy Ryan is sensational and the main reason to see Netflix’s crime drama “Lost Girls”, which is based on a real, unsolved case. The movie itself is intriguing and well-made, but it remains earthbound while its leading lady delivers an unforgettable performance. When her daughter disappears, Ryan’s Mari Gilbert would stop at nothing to get answers from the local police and the community where she was last seen. The plot truly thickens when her perseverance brings attention to over a dozen murdered sex workers in the same area. Director Liz Garbus takes a “matter-of-fact” approach to her material. She’s not very much interested in high drama, but her film does give you much food for thought. And at the center of it all is a resilient Amy Ryan, who allows us to experience what her character is going through at every stage of the story. But because the film is based on real-life events, don’t expect answers to all your questions, which might turn some viewers off, and understandably so. Still, “Lost Girls” has enough pedigree to justify its existence. If anything, it made me want to read more about these unsolved cases. That’s gotta be worth something.