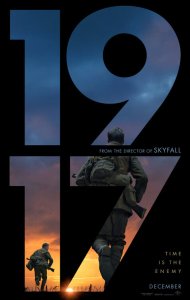 I don’t use the word “immersive” lightly, but that’s probably the best way to describe Sam Mendes’ masterful “1917”. From the first frame to the last, Mendes and his cinematographer, the legendary Roger Deakins, have managed to pull-off the impossible: follow two soldiers (in what seems to be one continuous take) through uncharted territory as they try to deliver an important message and save the lives of 1600 British soldiers. It’s one hell of a mission, and we are right there on the field, feeling what these young men feel as they cope with the idea of looming death at every corner. Much like Nolan’s “Dunkirk”, Mendes cuts right to the chase, which means we don’t get much backstory. And yet, I found myself rooting for these characters, every step of the way. It’s a spectacular achievement, and the acting is superb, but this isn’t a film that needs one star to carry it through. George MacKay and Dean-Charles Chapman are both sensational here, but it wouldn’t mean a damn thing if the film didn’t grab me as much as it does. In fact, I can’t remember the last time a war movie held me spellbound for two hours, without letup. Everything about “1917” is so vividly depicted and so intense, that you won’t be able to take your eyes off the screen. It’s a groundbreaker with the resonant force of a timeless classic. Oscar or not, it’s a must-see.