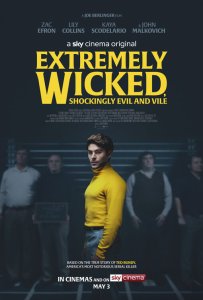 A movie about Ted Bundy, the serial killer who caused mayhem during his trial in the late 1970’s after he brutally murdered dozens of young women, wasn’t something I was looking forward to. But having seen the terrific Netflix documentary “The Ted Bundy Tapes”, I decided to give the movie a chance. As it turns out, it was a waste of time and talent. Aside from Lily Collins’ solid performance as Bundy’s girlfriend, who refused to believe that her long-time partner was capable of such atrocious acts, this film version of one of the most notorious serial killers of all time is a complete misfire. Zac Efron doesn’t look or sound like the real Bundy, but that’s the least of this film’s problems. Director Joe Berlinger (who, ironically, directed the much superior documentary) recounts most of the events that we’ve seen in the documentary, except they’re bits and pieces that never really stick. There are a few good moments here and there, but they’re overshadowed by a paper-thin script and a sense that we’ve seen it all before. Sorry to say, this movie sucks.