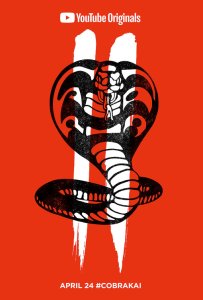 Having reviewed the first season of “Cobra Kai” last year, I thought it would be a good idea to do the same after binge-watching season two. This is a terrific follow-up to last year’s Youtube show that gets everything right from the word go. If you recall, season one ended with Martin Kove’s sensei Kreese entering the life of Johnny Lawrence once again, following his team’s win in the All Valley Karate tournament. It has been 34 years since they last saw each other, and this might be the perfect opportunity for Kreese to make amends for the harm he’s caused in the past. Or is it? Meanwhile, Ralph Macchio’s Daniel LaRusso decides to reopen Mister Miyagi’s old dojo by welcoming new students and teaching them the way of his old master. That’s season two in a nutshell, a truly perfect “sequel” that does everything to satisfy old-time fans of the Karate Kid series. I have to admit that I was skeptical back in 2017 when I heard that a series was being developed. But having seen all 20 episodes now, I don’t think I could ask for a better comeback. So kudos once again to the writers for pulling-off the near impossible. And kudos to all the returning actors who made a happy kid out of me. If you grew up with the Karate Kid movies and still haven’t seen “Cobra Kai”, you’re missing one of the best shows streaming online right now. Bring on season three!