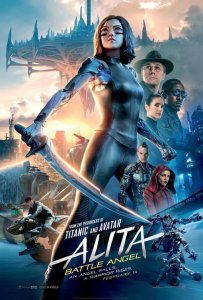 Judging from the early reviews, you’d think that “Alita: Battle Angel” is bound to flop. But now that I’ve seen it, I can tell you that it has enough visual effects and production values for two movies, and I had a good time with it. For one, it’s hard not to admire producer James Cameron’s vision. This has been a passion project of his since the mid-90’s, and it took over 20 years to finally bring it to the big screen. Based on the Japanese manga series “Gunnm” and set in the 26th century, Alita (played by Rosa Salazar) is a deactivated female cyborg who is found and revived by Dr. Ido (Christoph Waltz). She can’t seem to remember who she was, which makes things even more interesting when she discovers the ability to kick ass. Director Robert Rodriguez  stages one pulse-pounding action sequence after the other, but none of this would matter if we didn’t actually care for our heroine. I found myself rooting for her every step of the way, and that’s no easy feat, especially in a movie that has plenty of technical wizardry to show off. My only complaint is some of the corny dialogue in key moments (you’ll know it when you see it). But no movie so skillfully staged and so rich in imagination should be dismissed out of hand. I knew almost nothing about “Alita” prior to this movie, and I left with the curiosity to read more about her. I say put your prejudices about science-fiction films aside and go see “Alita”. It’s a fun time at the movies.