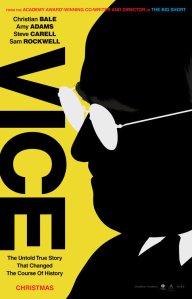 I have a confession to make: I was not looking forward to this movie. As much as I love Christian Bale, I never thought I would be interested in a movie about Dick Cheney, the American politician who served as a Vice President of the United States from 2001 to 2009. But as soon as the movie opened, I knew there was something different going on here. If you’re familiar with writer director Adam McKay’s “The Big Short”, then you probably know that he likes to tackle serious subjects with a dose of dark humor that makes it damn near irresistible. Such is the case with “Vice”, a movie that gives you much to think about while laughing yourself silly. McKay is hunting bigger game here, portraying Dick Cheney as a dick (no pun intended) and probably pissing off everyone who was involved in the George W. Bush administration. McKay doesn’t hold his punches, and the movie truly soars as a result. But the real strength of “Vice”, and the reason it must be seen, is Christian Bale. Many great actors have portrayed historical figures and won an Oscar for it. But in a short space of time, Bale makes us forget about prosthetic makeup and persuades us that he is indeed Dick Cheney. He is an ambitious man who craves power and would do anything to get it. One couldn’t ask for a better performance from any screen biography. Kudos to McKay and his collaborators for cooking-up one of the smartest films of 2018. And kudos to Bale for yet another terrific transformation. Oscar or not, “Vice” is a must-see.