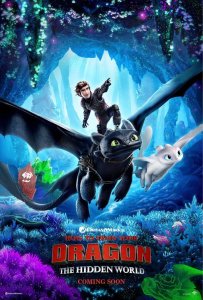 I am not a big fan of the number 3, but when it comes to animated movies, I am willing to make an exception. Here’s a trilogy that remained consistent over the years, delivering one spectacular installment after the other. And “The Hidden World”, the first sequel in five years is no exception: it’s a fun-filled adventure with just the right dose of humor to satisfy fans of the series. After an action-packed opening sequence that gets a bit chaotic, the movie gets down to business, and its business is telling a good story. Hiccup (once again voiced by Jay Baruchel) and his friends discover that Toothless isn’t the only Night Fury in the world. This takes them on an adventure to find the “Hidden World”, a place where dragons of all types live. Meanwhile, a tyrant named Grimmel (a delightful F. Murray Abraham) has an evil plan of his own, one that involves him hunting down Toothless and destroying everyone that tries to stop him. Writer-director Dean DeBlois, who made the first two films, knows exactly how to keep the action going while guaranteeing rooting interest from start to finish. We know the stakes are high here, and we want our heroes to succeed. That’s what makes this third installment work so well, along with some beautiful visuals and an emotional climax. Will kids enjoy it? I have no doubt in my mind. But adults may find some real rewards in it as well. It’s that good.