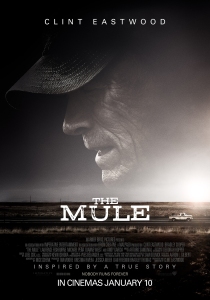 If I had to give you one reason to see “The Mule”, Clint Eastwood would be it. It’s a joy and a privilege to see him in top form at 88, playing a Korean war veteran who somehow ends up transporting drugs for a Mexican cartel. He is also a man who is trying to reconnect with his family, after years of neglect. Let me pause a little bit here to mention the fact that Clint Eastwood’s acting debut was over 60 years ago. I kept thinking of that as I was watching “The Mule”. As an actor and director, Eastwood never truly ran out of steam. His character’s story here isn’t nearly as good as the performance itself, but I would gladly watch it again just to savor his presence onscreen. And he has assembled an array of talented actors, including Andy Garcia, Bradley Cooper, Laurence Fishburne, Michael Peña, and Dianne Wiest, who plays his ex-wife. The story moves at a leisurely pace, and that’s a sign of a director who is truly comfortable with his material. But that can also be detrimental, especially in the last act where the movie requires more action. No matter. “The Mule” is in cinemas because of Eastwood’s star power, and he’s still got it, even after all these years. In Hollywood these days, that’s no easy feat.