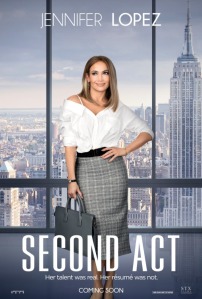 Jennifer Lopez plays a 40 something woman who wants to prove that street smarts is just as good as book smarts. So she creates a fake CV and lands a dream job as a consultant for a big company. That’s the premise of “Second Act”, a movie that pretty much gives zero fucks about logic and asks the audience to do the same. And the sooner you realize that the more fun you’ll have with this harmless comedy. I honestly have nothing much to say about it. If you’re the target audience for this type of comedy, you’ll probably enjoy it. Others may look for the nearest exit. I fall somewhere in between. I cringed at the film’s many utterly illogical scenes, but Lopez and the cast surrounding her made it go down easier. After several weeks of giant blockbusters, I guess it’s not so bad to sit back and relax with a film like “Second Act”. It doesn’t reinvent the wheel, but it does serve its purpose.