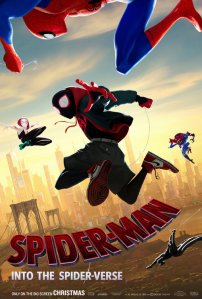 Believe the hype. “Into The “Spider-Verse” isn’t some animated spin-off that will eventually get lost in the shuffle. It’s one of the best “Spider-Man” movies ever made and my personal favorite since Sam Raimi’s “Spider-Man 2”. It gave me a lot to cheer for: a fresh concept and an incredible execution to match it. Credit Bob Persichetti, Peter Ramsey and Rodney Rothman for directing this exceptional animated feature with a sharp eye, winning both hearts and minds along the way. In a world where Peter Parker is gone (weird, right?), Shameik Moore is perfectly cast as Miles Morales, a teenager who, much to his surprise, becomes the new Spider-Man one night. Here’s the twist: he’s not the only Spider-Man around. How? You’ll have to see for yourself. Suffices to say that with so many characters involved and a ton of exposition, the movie never goes off the rails, and that’s no easy feat. In fact, the film is a constant delight, as clever and surprisingly funny ideas are presented, one after the other. And even during a chaotic climax, the movie never loses sight of the human element, and that’s where it scores extra points. Shortcomings? I honestly cannot think of anything bad to say about this film. It entertained me from start to finish as I found myself rooting for each and every character in this colorful world. It’s a beautiful film from start to finish and my number one contender for best animated feature of the year. Oscar, take note.