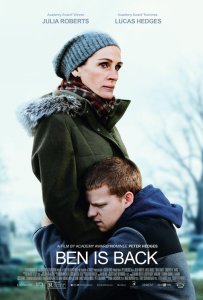 “Ben is Back” is at once intriguing and frustrating. While the first half grabbed me, I found myself losing interest after the hour mark. But at least I can start on positive note. Writer director Peter Hedges opens his movie with a bang: Julia Robert’s drug addicted son shows up unexpectedly on Christmas eve. It’s a hell of an opening sequence, and over the course of a day, old wounds are reopened, and layer by layer, we discover the ugly skeletons in this family’s closet. The cast couldn’t be better, and each one gets the chance to shine, notably Roberts who hasn’t been this good in years. Lucas Hedges is equally good as her son, a boy with a troubled past seeking redemption. But then something happens around the hour mark, and instead of being pulled into this story, I felt myself drifting away from it. I won’t say why or how, but I wish the movie didn’t have to take that path. And when it ended, I felt nothing. That’s a shame, because as a showcase for gifted actors, “Ben is Back” remains potent and worth seeing. But as a moviegoer seeking an emotional experience, I shouldn’t be thinking of what’s missing. And that’s where the movie falls short in my opinion.