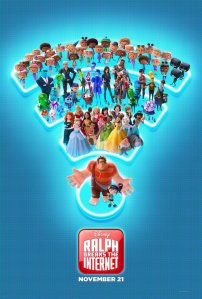 If there’s one animated movie that truly appealed to me these past few years, “Wreck it Ralph” would be it. Here’s a character straight out of an 80’s arcade game, and as someone who loves retro games and owns an arcade cabinet at home, you can tell just how happy I was with that first movie. But I have to admit: I approached the sequel with a combination of eagerness and apprehension. Will it be as good as its predecessor? In this case, I knew within minutes that the answer was yes. I felt right at home as soon as Ralph appeared on screen again. And the movie kept that appealing vibe, right through the closing credits. That’s no easy feat, especially when the story takes a completely different direction this time around as Ralph (John C. Reilly) and his best friend Vaneloppe (Sarah Silverman) find themselves visiting the internet (bet you couldn’t tell that from the title) in order to save her game from completely shutting down. It’s one hell of an idea, and I couldn’t ask for a better result. In addition to being hugely entertaining, the movie has heart, especially when it matters the most. So when we’re meant to care for these characters and root for them at the end, we do. I’ll say no more, except that “Ralph Breaks the Internet” has that ability to enchant audiences of all ages; it’s easily one of my favorite animated movies of the year.