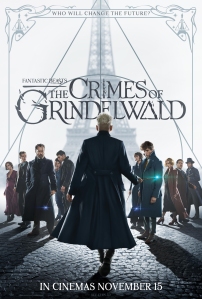 It lacks the freshness of the first movie, but “The Crimes of Grindelwald”, the second installment in the “Fantastic Beasts” series (and 10th movie if we’re including the Harry Potter films) has all the right ingredients to satisfy diehard fans. I say that with full confidence because all the fans at the worldwide premiere I attended were cheering as soon as the credits started rolling. Having introduced an array of colorful characters in the first film, this sequel takes a “darker” approach, but that’s not necessarily a bad thing. As soon as the movie opens, we feel that there’s something at stake: powerful Dark wizard Gellert Grindelwald (Johnny Depp) has escaped custody and Albus Dumbledore (Jude Law) has enlisted his former student Newt Scamander (once again played by Eddie Redmayne) to take him down. We are carried along on this journey by the soulful performance of Redmayne, who is a joy to watch once again. And he is surrounded by a first rate cast that includes Johnny Depp, Ezra Miller, Zoë Kravitz and Katherine Waterson. Complaints? I’d say the element of surprise is gone. Having followed this series ever since “The Sorcerer’s Stone”hit theaters back in 2001, I have always looked forward to the next film. With “Fantastic Beasts and Where to Find Them”, it was a new adventure all over again. Here, we already have an idea of what’s to come, so it was up to JK Rowling and director David Yates to keep us hooked. Needless to say, they did a tremendous job, as I found myself rooting for all these characters, every step of the way. In sum, this movie preaches to its enormous choir of fans and should give them exactly what they want. Personally, I found it intriguing and had me looking forward to the next installment too.