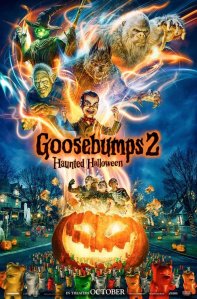 It was never going to top the 2015 original, and if we’re being completely honest, this sequel isn’t as memorable. But it gets the job done, especially if you’re watching it around Halloween season with your family. Jack Black stole the show in the first movie as writer R.L Stine, who wrote so many best-selling horror tales that still entertain kids to this day. Black is reduced to supporting role here, and that’s a shame if you ask me. Still, there’s fun to be had in this sequel as evil dummy Slappy returns to wreak havoc on Halloween. It’s up to three new kids to stop him and save the neighborhood from giant monsters. Pretty straightforward stuff. Fans of the books will enjoy spotting references from their favorite stories, while others might be encouraged to seek the books out. Either way, there’s no doubt that the Goosebumps stories are still alive and well in 2018. Is the movie revolutionary? Far from it. Will I remember it in a few weeks? Probably not. But it does serve its purpose: to entertain kids and their families on Halloween.