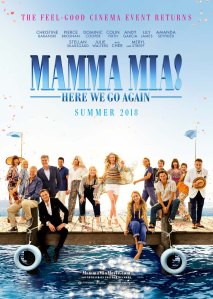 We can sit here and debate for hours whether this sequel should have been made or not, or you can just sit back, relax, and enjoy it for what it is: a fun, light-hearted continuation that surprisingly works, with beautiful scenery and unforgettable music. For die-hard fans of the original, it’s a good opportunity to reunite with their favorite characters, and learn more about Donna’s past (played by Lili James here), as a fresh graduate in the late 1970’s.  Which means the movie goes back and forth in time to tell two stories that finally come together at the very end. I’ve seen reviews calling it “The Godfather part 2” of the “Mamma Mia” series, in the way this sequel tells its story. That’s not completely untrue, but unlike “The Godfather part 2” (which surpassed the original), I still prefer the first Mamma Mia film. Still, the movie’s a lot of fun, and everyone seems to be having a great time here, including the great Cher, who has a brief appearance as Donna’s mother.

Despite her memorable cameo, Meryl Streep is sorely missed here. No matter, Lili James more than fills the void, and she’s simply phenomenal. In a movie that only wants to make you dance to the sound of “Dancing Queen” and other ABBA classics, James plays it for keeps. You won’t be able to resist it.