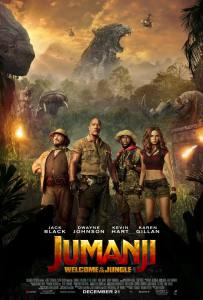 I was no more than 8 years old when the original “Jumanji” film was released. As an undemanding kid, the movie entertained me, despite its simple story. Now as an adult, I walked in to see “Welcome to the Jungle” with no particular expectations, and what I got in return was a fun ride, fueled with solid performances from Dwayne Johnson, Kevin Hart, and Jack Black. Interestingly enough, I’m not here to compare one version with the other: I like them both. The old film had Robin Williams as a man who was trapped for decades in a board game. The new one finds a bunch of high school students taking part in a video game, only to become the adult avatars they chose (side note: the video game console looks and feels like an Atari system. There’s also a Jaguar statue in the game. A reference to the Atari Jaguar maybe? Or maybe I’m reading too much into it). The story does take its time establishing its building-blocks, and the movie could have been trimmed a little bit. Other than that, I had a blast watching it. I think what matters most here is rooting interest, and that is firmly established and well-played out, thanks to an array of well-written characters. The action scenes are fast-paced and never dull. Sure it gets hectic when it reaches its climax. But “Jumanji”, knowing its audience, lets it roll. It’s a fun time at the movies.